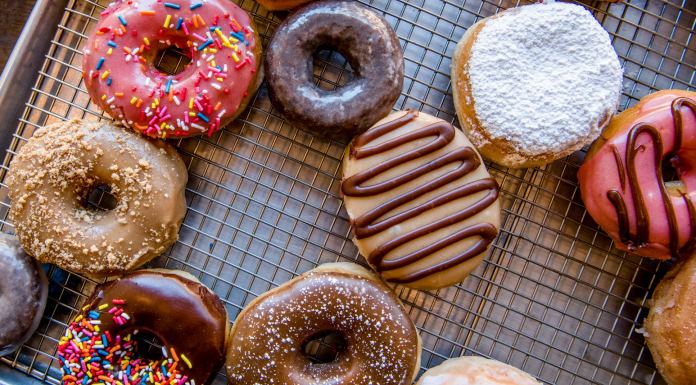 Panama City Beach has some of the best donuts in Florida.  PCB has almost 30 miles of beaches, and fortunately, you can get great donuts no matter where you are at.

The following are my favorite three donut places in Panama City Beach. I will admit that I like my pastries to be a little bit heavy side while other’s may prefer more fluffy and light. My favorite choices are an apple fritter or a simple chocolate glazed. 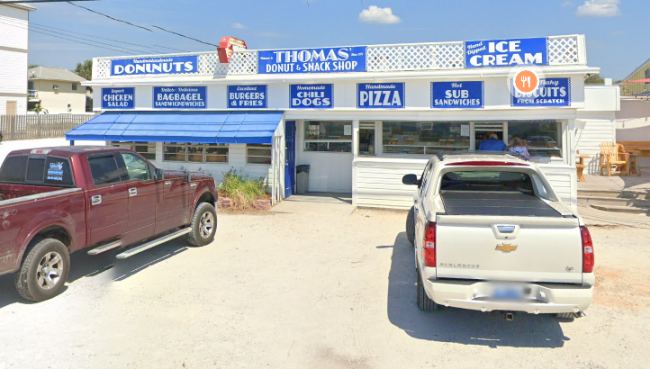 Thomas Donuts is on the very west side of Panama City Beach. They are part of Mike’s Family of Restaurants which includes Mike’s Cafe & Oyster Bar.

This spot is my top pick for Panama City Beach. Everything is fresh and you have a variety of choices. I have yet to have anything here that I didn’t enjoy.

The great thing about Thomas Donuts is that everything is simple and easy – From pricing to hours.. All the donuts are a dollar and the Donut shop is open every day from 6:00am to 8:00pm.

Plus, this Panama City Beach snack shop also serves breakfast, pizza wings and sandwiches. So, it’s easy to get everyone to agree on a place to go, even if they don’t like donuts.

There is often a line here, but the earlier you go the shorter the line should be. Or you can phone your order in and pick it up. You can avoid standing in line this way.

A’More Donuts – Some of Florida’s Best

A’More Donuts is also towards the west side of PCB Between Gulf World and M.B. Miller County Pier. If you like little hole in the wall joints, then A’More Donuts is a must visit while in Panama City Beach.

But there is a problem, they open at 6:30 in the morning and will generally sell out before Noon. This is consistent with many of the best little donut shops across the country.

While known for their great donuts, A’More Donuts also has burgers, subs, and ice cream.

The Donut Hole has long lines and sells out fast. Which lets you know how good their donuts are.

But not to worry. If they sell out of donuts, you can still get a sandwich or breakfast (which is served all day).

It’s way west of Panama City Beach, near Rosemary Beach. But, many locals make the drive not only for the donuts, but also for a great breakfast. Of course, if you are staying in the South Walton or 30A area, then it’s a no brainer.

Surprisingly, there are not a lot of donut places in east Panama City Beach. Sunrise Cafe is centrally located, and is just a short drive if you are staying in East PCB. The bakery is about a half-mile west of Pineapple Willy’s.

The last time I picked up some goodies from Sunrise was when I was caught in a traffic jam. A tour bus bottomed out going up the ramp into the Sunbird Beach Resort. It blocked the entire street and I knew it would be a while before it could be moved. I left my car in traffic and walked in just as they closed.

The manager was extremely kind and sold me the last batch of cinnamon rolls. She even brewed me some fresh ice tea. They had just dumped out all their tea before closing.

I’ve had donuts from Sunshine Bakery before, and they have always been excellent. Now I was able to enjoy cinnamon rolls in my car while watching a tow truck driver try and figure out how to move a 30 foot bus out of the road.

Krispy Kreme is an Option When in East Panama City Beach 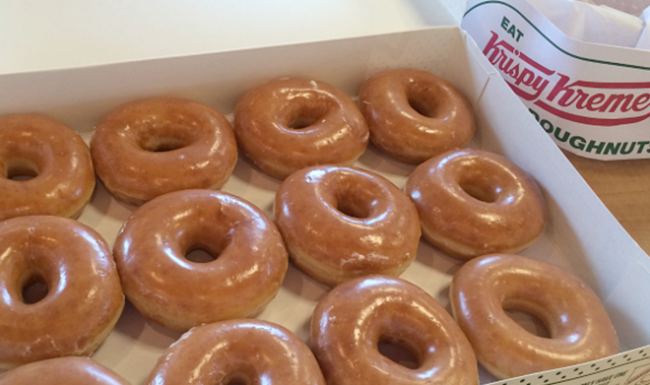 You can’t go wrong with a Krispy Kreme. You will have to drive across the bridge into Panama City. It is outside of Panama City Beach, but it might be faster to get to (due to traffic) than any other doughnut place if you are staying on the east side.

Another advantage is that you can get a donut late in the day without worrying about them being sold out. They are open until 8:00pm

If you get lucky, the “Hot Donuts Now” sign will be lit up.

Yes, it’s a chain, but I still remember my first Krispy Kreme. It was years ago at their facility on Ponce de Leon in Atlanta. I watched through glass windows as they were getting made and getting a coating of  liquid sugar glaze. I bought a hot glazed one that just came off the conveyor belt. It was so soft and gooey I could almost drink it with a straw.

Note: Since the publishing of this article, the Krispy Kreme in Atlanta had a major fire and is now permanently closed with no plans to rebuild at this time.

Related:  Where Do the Locals Eat in Panama City Beach?

Dan-D-Donuts is Worth the Drive

Dan-D-Donuts & Deli is in Panama City and not in PCB.  But, it’s worth the 20 minute drive across Hathaway Bridge.

The doughnuts  can’t be beat. And, if you are really hungry, a ‘King Dan’ (plain glazed or chocolate) should fill you up, as it’s about 5 times the size of a normal donut… it’s huge.

There is also a deli with breakfast and lunch items, but the star is the doughy yeasty sugary treats.

While I normally get an apple fritter, I couldn’t resist trying their pineapple fritter and it is now my go-to pastry at Dan-D-Donuts.

There is a new doughnut place about to open up in Panama City Beach. And best of all, it’s centrally located at the corner of Hutchison Blvd. and Front Beach Rd.

It’s going to be at 10260 Front Beach Road, Panama City Beach, FL 32407, and will be in the location of the old Back Yard Burgers that closed last year.

There’s (Almost) No Such Thing as a Bad Donut

Whether you like dense and heavy donuts or the light and fluffy ones, Panama City Beach Florida has enough of a selection that you can find what you want.