Dyer’s Burgers, in Memphis Tennessee, deep fries their hamburgers in 100-year-old grease. This iconic eatery has been on my bucket list for a few years. The Beale Street restaurant is reported to have the best burger in America.

Back when I first heard about Dyer’s, it was on the Food Network. It was a program called “Best Burgers in America” (or something like that). Back then, Dyer’s grease was only 93 years old, and it took me seven years to finally sink my teeth into one of their burgers.

The secret to Dyer’s world-famous hamburgers is that they deep fry the beef patty in grease that hasn’t been changed since 1919. Of course, Dyer’s must add grease occasionally, but the century old fat is still in the fryer. 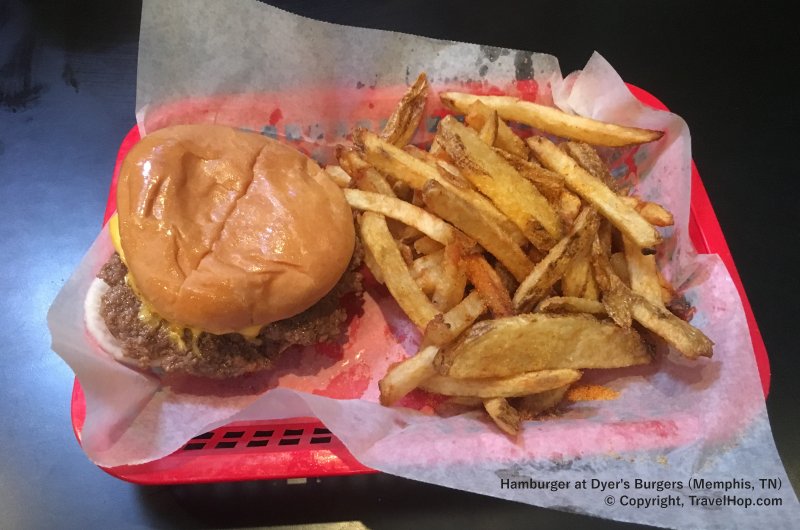 As crazy as it sounds, it’s almost the same principal as a cast iron skillet. The skillet absorbs savory flavors over the years, and you can taste it in the food.

Is It Really the World’s Best Burger?

The world is full of really great burger joints, and Dyer’s Burgers in Memphis is right up there at the very top. Suffice it to say, every time I’m in Memphis, I will not leave without getting a hamburger from Dyer’s on Beale Street.

A bonus to dining at Dyer’s Burgers is that you never know who you’ll run into. It’s a frequent hangout for celebrities.

Made it to Memphis and had to stop by Dyer's Famous Burgers on @BealeStreetMphs. pic.twitter.com/Jtv628jida

But the French Fries Stole the Meal

While the hamburger was one of the best I’ve ever had, the fries were even better. I asked the hostess at Dyer’s Burgers and she told me that the fries are also cooked in old grease. Although, not the same grease as the meat. The savory grease added additional flavor to the French fries that I’ve never tasted. They were one of the best batch of fries I’ve ever had.

The History of Dyer’s Burger Grease

When Dyer’s Burgers changed locations in Memphis Tennessee, they moved their valuable ancient grease in an armored car complete with armed guards.

The 100-year-old oil is strained every day of contaminants, so it’s a in effect cleaned daily. Because it’s heated to such high temperatures, any impurities are sterilized to hospital standards. So, it’s actually a very safe (and tasty) oil. In fact, if you order your burger without a bun, you can have a tasty gluten free meal.

But, no matter how it’s made, a Dyer’s hamburger should be on the “must try” list of every burger lover.