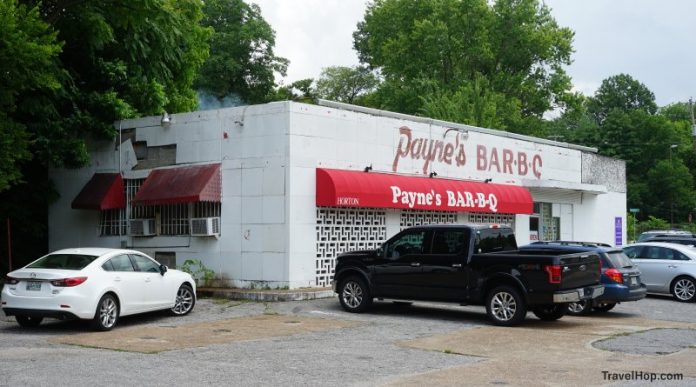 Payne’s Bar-B-Que in Memphis was a lucky find. An old friend of mine, Scott Thompson, has been a trumpet player on Beale Street and in Memphis for 30 years. On a recent trip, I asked him what’s the best Barbecue in Memphis and he (without hesitation) said Payne’s.

Payne’s Bar-B-Que is a little over three miles away from Beale Street in Memphis. It’s worth the short drive.

When you pull up to Payne’s Bar-B-Que, you notice that it’s a converted gas station. The service bay doors are painted shut, and inside you’ll see that it’s very plain. There are no decorations, other than the awards and numerous newspaper articles framed and put up on the walls.

The inside of Payne’s Bar-B-Que was lightly filled with smoke. The smell of charcoal made me only hungrier and added to the charm.

It’s a genuine hole-in-the-wall eatery and I mean that in the best way. In the age of tasteless chain establishments and mediocre independent restaurants, a hole-in-the-wall with great food is a rare find.

Payne’s Bar-B-Que: Some of the best barbecue anywhere (Not Just Memphis)

My friend recommended the ribs, but I was in the mood for a chopped pork sandwich. My sandwich arrived on a Styrofoam plate with a plastic fork. It highlighted that the star of the dish was the bar-b-que.

After just one bite, I realized why this place came so highly recommended. If I could eat at only one restaurant for the rest of my life, I would be happy to make it Payne’s.

If I had to criticize one thing about Payne’s Bar-B-Que, it would be the french fries. They don’t have any. Nothing goes better with a barbecue sandwich than a side of fries. Instead they only sell bags of chips. But that’s a small price to pay to get some of the best barbecue in Memphis.

I can’t wait for my next visit. On my next trip to Memphis, Payne’s Bar-B-Que is on my list. I still to get me a rack of their ribs that I’ve heard so much about.

And many thanks to Scott for recommending Payne’s. If you like Jazz, I would suggest catching his band, ‘Scott Thompson’s Rescue Animals’, they play all over the city.