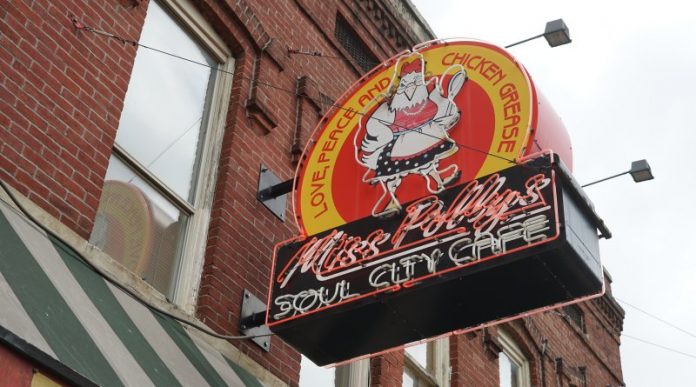 Miss Polly’s Soul City Café, in Memphis Tennessee on Beale Street, has one of the best southern menus you will find anywhere. When I saw the motto “Love, Peace and Chicken Grease” I knew I was in for a treat.

A hostess greeted us at the door and quickly sat us down. However, a quick glance at the menu quickly revealed a problem for me.

The biggest problem I had at Miss Polly’s Soul City Café was that there were too many delicious items on it. Their menu is not that large, but as a lover of Southern soul food, I wanted almost everything. Chicken and Waffles, BBQ Pork, Catfish, Pork Chops, Pot Roast, Meatloaf and more.

I settled on ordering the country fried steak dinner. The meatloaf and pot roast looked good, but I’m in Memphis TN so I went with something battered and fried. The dish did not disappoint. Miss Polly’s Soul City Café has one of the best country fried steaks I’ve ever had, and the white gravy was perfect. 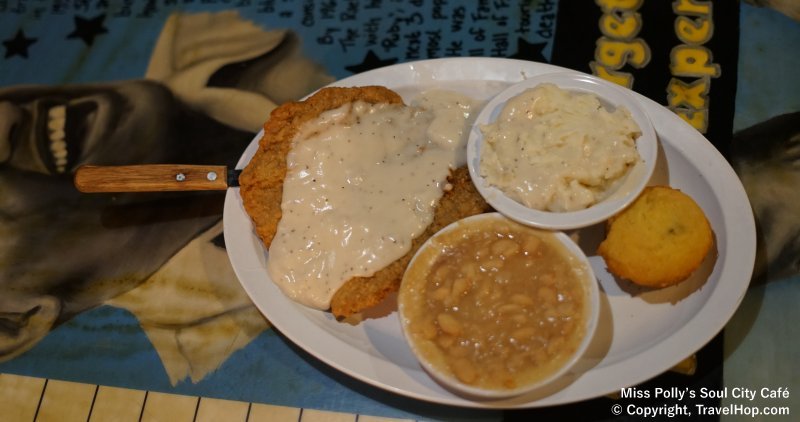 If I had to come up with a couple of complaints for this Tennessee place, it would bet these. The side order of white beans and ham had very little ham, maybe I was there on a bad night. Granted, I’m probably spoiled because my grandmother made her white beans with huge hunks of ham.

The side of white beans was still delicious, and I might have even licked the bowl clean. Not to worry, there are many more side dishes at Miss Polly’s Soul City Cafe that all looked equally great. Turnip Greens, French Fries, BBQ Beans, Fried Okra, Mac-N-Cheese, Mashed Potatoes, Sweet Potato Fries, and more. Just what you hope for from a Memphis TN soul food place.

The corn bread was spicy, and I prefer it more plain. But, that’s a personal preference and I can’t hold that against them. Some people like a little kick to their cornbread.

After my meal, I was stuffed, but… they had skillet fried pies. It’s where they take an ordinary fried pie, then fry it again in a cast iron skillet. And if that wasn’t Southern enough, the pies were fried in butter. So, I ordered a fried pie, only to be told they were sold out. But then it got worse.

The waiter told me that they were specially made Mennonite fried pies. My heart sank. One of the best things I’ve ever eaten was a blueberry fried pie from a Mennonite bakery off I-24 in Kentucky. It was 10 years ago, and my friends still get tired of hearing me talking about how great it was.

In Memphis, the waiter at Miss Polly’s Soul City Café told me they were expecting more pies in any day, so to come back. And come back I did. I showed up at the Beale Street eatery for the next two days only to be told the pies weren’t there. I left town heartbroken.

A butter skillet fried pie at Miss Polly’s Soul City Cafe is now on my bucket list. I’ll be back if it’s the last thing I do (and it might be). First thing scheduled for my next trip to Memphis is a deep-fried hamburger from Dyer’s Burgers (yep, in 100-year-old grease) and then a walk down Beale Street to Miss Polly’s for a fried pie. The next will probably be a ambulance ride to the emergency room for my heart attack – worth it.