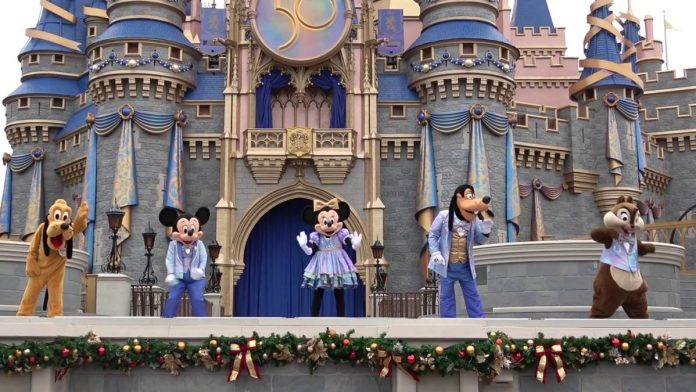 When you stay at off-site hotels near Disney World you save money and usually end up with a better place to stay.

Although there are many hotels at the Disney World Resort, they can be very expensive. Plus, they often don’t offer any more amenities than their off-site counterparts.

Many people who visit Disney World like to take in the entire experience. So, they will opt for staying on-site. But if you intend on spending lots of time at the theme parks, you will quickly find that hotels on-site are very expensive and eating outside of the park can add up also.

What to do? Take a close look at some off-site hotels near Disney World and select one for your next visit to Orlando.

There are several hotels near Disney World that provide shuttle service to and from the theme parks.

Many of the nicer hotels are booked months in advance. So, book early, especially if you plan to visit Orlando at Christmas time.

Here are our picks for Hotels near Disney world that are off-property.

The Walt Disney World Swan, The Swan Reserve, and The Dolphin Resort are all managed by Marriott.

So, while technically they are owned by Disney, if you have Marriott status, then you can use all you perks and benefits and Marriott Bonvoy points at these hotels.

The good thing about the partnership between Marriott and Disney, is that the Dolphin and the Swan are close to the theme park. You can walk or take the free shuttle.

You also get early park entrance, and all other benefits as if you were staying at an actual Disney property

This off property hotel is a short drive from both the Magic Kingdom and Epcot. This makes it a great location for those who want to experience everything Disney World has to offer.

The Swan Reserve Hotel in Orlando

The Swan Reserve Hotel in Orlando is one of the closest hotels to Walt Disney World. Located just five miles away from the main gate entrance. It is also one of the hotels that are on Hotel Row, which is something that many people consider when looking for hotels near Disney World Orlando.

What makes this hotel unique compared to other hotels near Disney World Orlando (like the Sheraton Lake Buena Vista Resort) is that it offers a full luxury resort experience for an affordable price.

The hotel is actually part of the Walt Disney World Swan and Dolphin hotels, which are two hotels but appear as one.

The Dolphin Resort Near Disney

The Dolphin Resort is a very nice and luxurious hotel that is located right near Walt Disney World’s Epcot and Disney’s Hollywood Studios.

This hotel has a pool, hot tubs, showers, hotels and lots of fun activities for anyone who stays here to enjoy.

Orlando has many great hotels and also some super bargain rates. But be careful, you may find yourself fighting early morning rush hour traffic getting to the parks to save a few dollars.

The Wyndham Garden Lake Buena Vista is a hotel near Disney World that families looking to save money will love.

@travelingmoms Thankyou so much 4 the hotel stay at the Wyndham Garden Lake Buena Vista Disney Springs Resort We had a wonderful time #TMOM pic.twitter.com/XXDuNzCT3X

There’s a heated pool where kids can play and enjoy their vacation. For added fun, there is even a splash pad and water playground. The hotel also provides guests with a breakfast buffet each morning of their stay.

For family convenience, children can also eat free at the on-site restaurant. There is an on-property grocery store and a Starbucks where you can grab a snack or breakfast before heading out to the theme parks.

The hotel also has a small arcade room. A great place that your kids can enjoy while parents get some much needed rest.

It has a spectacular view of the lake and it also offers free parking to its guests. This off-site hotel near Disney World is adjacent to Walt Disney World’s Magic Kingdom park. So, it’s very easy for you to access all the fun attractions inside.

The Holiday Inn Orlando Disney Springs is the closest off-site hotel to Disney World at 4 miles away.

Related:  Where to Watch Fireworks in Orlando

Each room is unique, has it’s own name, and offers different rates for each part of the year. They are all less than 15 minutes from Disney World by car or shuttle bus and hotels near Disney World often offer free shuttles to the park.

Not everyone traveling to Orlando has a car. To avoid racking up huge Uber fees, you may want to consider staying at a hotel with shuttle service to Disney World.

The hotels are designed to be luxurious, yet affordable at the same time.

It is a large resort with over 20 buildings featuring one and two bedroom suites. The Ritz-Carlton Orlando is also located at Disney Springs close by. The hotels are located within walking distance of each other.

The hotels together offer more than 6,200 rooms together .

Amenities include the Mall at Millenia (with over 180 shops), The Westin Imagine (the biggest spa in Florida) and an AMC movie theater complex.

The Fairfield Inn & Suites Orlando Lake Buena Vista is a top choice among hotels near Disney. The hotel is just minutes away from the Walt Disney World Resort and other Orlando attractions.

This is an “all suite hotel”, so it’s perfect for families that want the feel of home while on vacation. The Fairfield Inn offers free shuttle to both Disney World, Universal Studios and SeaWorld.

In Orlando, The Caribe Royale All-Suite Hotel is an off-site hotel near Disney World that is perfect for families on a budget.

The Caribe Royale All-Suite Hotel in Orlando is about 8 miles from the front entrance of Walt Disney World and offers numerous amenities to its guests, making it an excellent choice for anyone looking for hotels near Disney World with kids.

When traveling with your family, you will probably want to have a washer, dryer, and kitchen in your room.

The Magic Village Resort – Lots of Room for Families

The Magic Village Resort in Orlando is a best off-site hotels near Disney World that is located just 3 miles from Orlando’s most popular theme park, Disney World.

With over 1,550 square feet, the hotels 2-bedroom villas are more than enough room for guests to enjoy one of the hotels 11 unique themed suites.

Each suite at Magic Village Resort is decked out with an abundance of amenities including a full kitchen, washer/dryer and HDTV’s throughout the villa.

Guest amenities at Magic Village Resort include a private pool, on-site restaurant and an arcade for guest use only.

With such excellent hotels near Disney World located just minutes from many popular attractions like SeaWorld Orlando, Universal Studios and Wet ‘n Wild. Here, guests won’t run out of things to do during their stay in Orlando.

The Club Wyndham Bonnet Creek Resort is one of the hotels near Walt Disney World. It is located off Bonnet Creek Parkway in Orlando, FL 32821.

The Resort is also surrounded by 527 units all-suite accommodations which are owned and operated by Wyndham Vacation Ownership, Inc., including one-, two-, three-bedroom units as well as expansive penthouse suites.

In addition to the great amenities that all Walt Disney World hotels have, the Club Wyndham Bonnet Creek Resort has a couple of its own that add to the overall experience.

The Club Wyndham Bonnet Creek Water Park is an attraction in itself that entertains children and adults alike. Amazing water slides, a lazy river, a whirlpool area with a multi-colored hot tub, an emerald green pool as well as a poolside bar make the water park a great place to be during your stay.

Resorts are a great way to not get burned out on Disney while in Orlando. Many families stay at a resort hotel for several days – then visit the park for only a few days.

They will alternate spending their days at the resort hotel, then only visit Disney World every other day.

The Four Seasons Resort Orlando is one of the most luxurious hotels in all of Orlando, which is only magnified by it’s excellent location near Disney World.

This hotel also has amenities beyond hotels at Disney World or hotels near Disney World. So, it’s a great place to stay if you’re visiting Orlando for an extended period of time. The spa is one of the very best in all of Orlando Florida. And, the pool allows guests to swim both indoors and outside.

The Four Seasons Resort Orlando also allows pets and has a stunning beach with a sunset view over the waterways running through the area.

Lake Buena Vista Resort Village & Spa is a Disney-owned hotel located directly across from the Magic Kingdom park. It’s near Disney World and great for adults who want a romantic vacation without children.

The resort consists of two hotels, which share amenities including pools and fitness centers. The hotels are connected by an open-air walkway which brings you straight to the Magic Kingdom. And, it also houses a sundry shop, salon and other convenience stores.

As all the room are suites, it also perfect for families.